Sorry my blogging has been a little sparse,
it's because we've had two world sporting events
collide in this household!

By day we've been enjoying the Grand Slam tennis at Melbourne Park,
cheering on our very own WTA Pro Tennis Player,
and by night, we've been volunteering at the Asian Cup,
Australia's biggest ever football tournament
'Go Soccerroos - Champions of Asia'!

Your Little Wren has a very important role
in securing Aussie Open on court tennis success.
I'm in charge of toast and Tim Tams!

You know right, that behind every successful athlete
is a great family, a fantastic coach
and the lady with the Tim Tams! 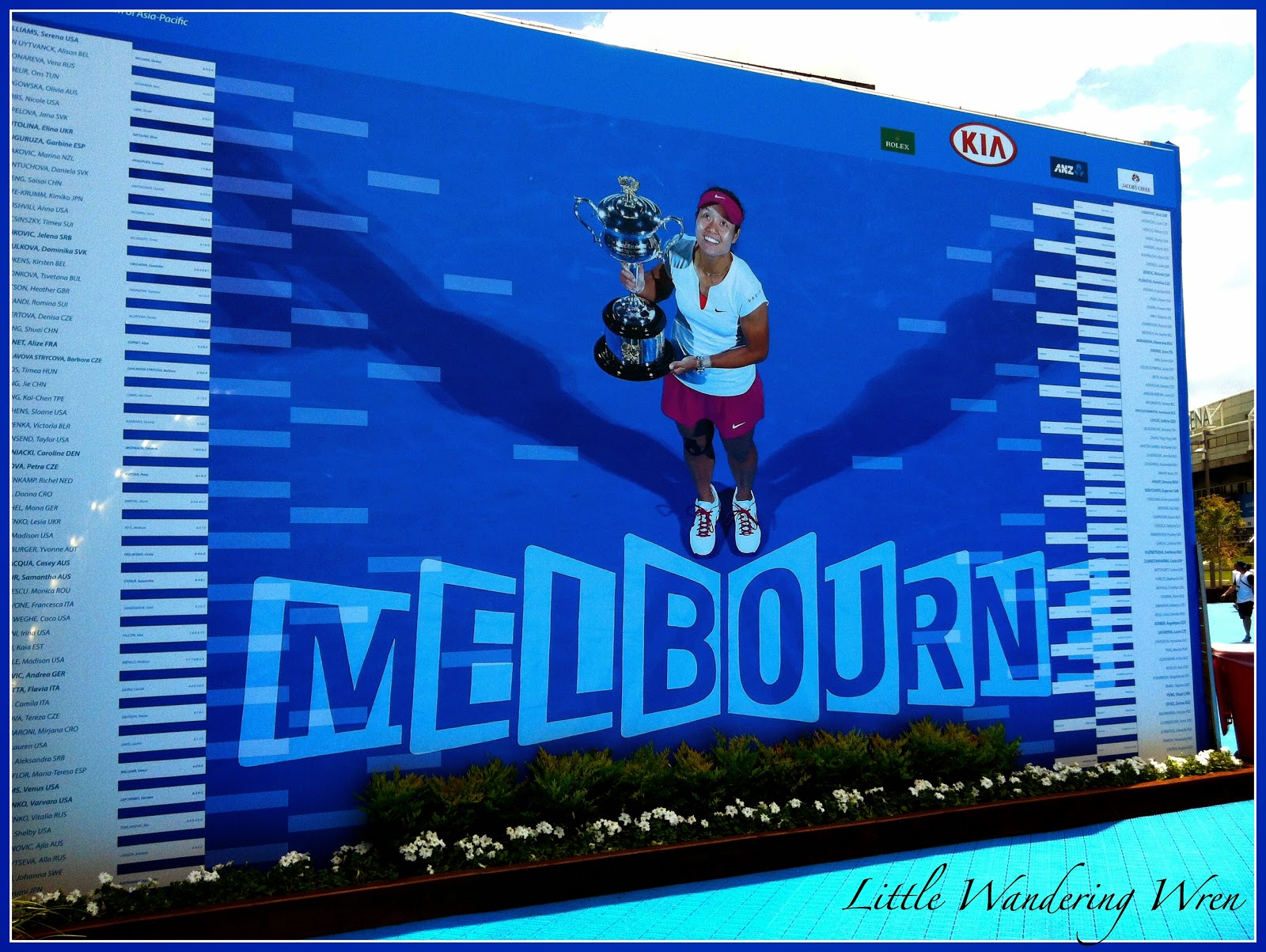 It's been seven years since we started housing at the Open.
Originally this was an official program offered by Tennis Australia.
We were interviewed, our house inspected and before we knew it
we were hosting two Eastern European players.

In recent years the housing program has been disbanded.
However we're lucky our contacts with players continue informally.

For the past five years we've welcomed team Falconi to stay.
Irina Falconi, former world No 73 is the American tennis player
who makes our Aussie Open experience so special. 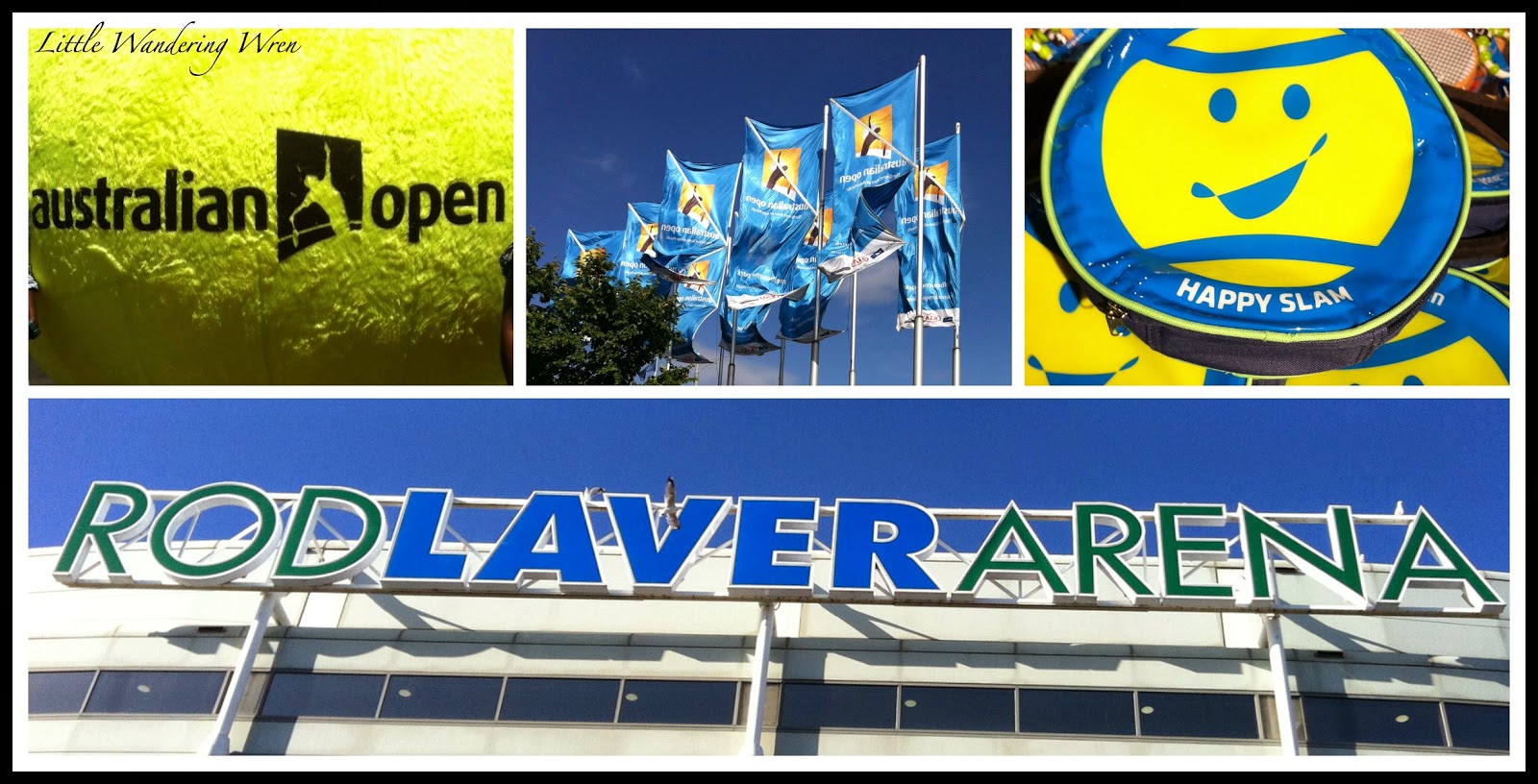 I guess housing is not for those who like certainty.
Our days are unpredictable, exciting
and totally revolve around tennis matches.
There is the exhilaration and excitement after a win
and the opposite after a loss.

Irina's fabulous Falconi Files blogs,
will give you an insight into her life.

Here she talks about having very little notice of playing
in the Doubles tournament.
I had an appointment in town that day.
By the time I came out,
the match had been scheduled, played and finished!

It is the only Aussie Open Grand Slam match in five years
that I have not been there cheering
"lovely"
at every forehand winner! Or take the second round singles match.
The tournament schedule is released early evening the night before.
We can see Irina is playing fourth match on Court 8
after a men's singles and two men's doubles matches.

It's tight timing because I'm volunteering at the Asian Cup
It's our last Melbourne match and the Quarter final.
The football starts at 6.30pm and I'm on duty from 3.30pm.
I agree with my Manager I can run across the road to watch
as soon as the Asian Cup kicks off...

Yes only in Melbourne can we have two world events on
opposite sides of the road... 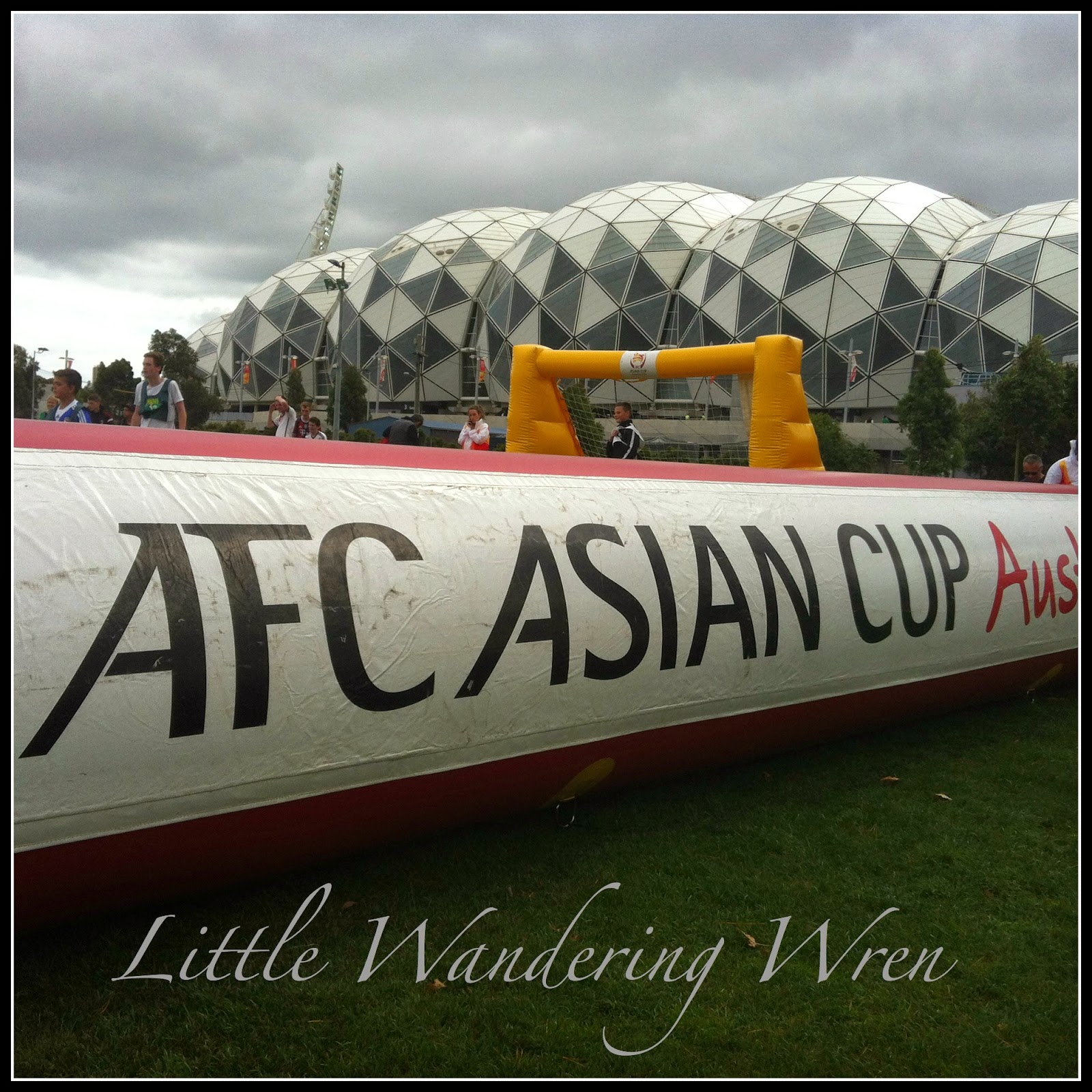 The only problem is that the tennis matches on Court 8 go really quickly.
I get a text from my son
"She's warming up"
It's 4.55pm...

There I am in my Orange sunshine shorts
greeting Korea Republic and Uzbekistan
fans arriving for the match... 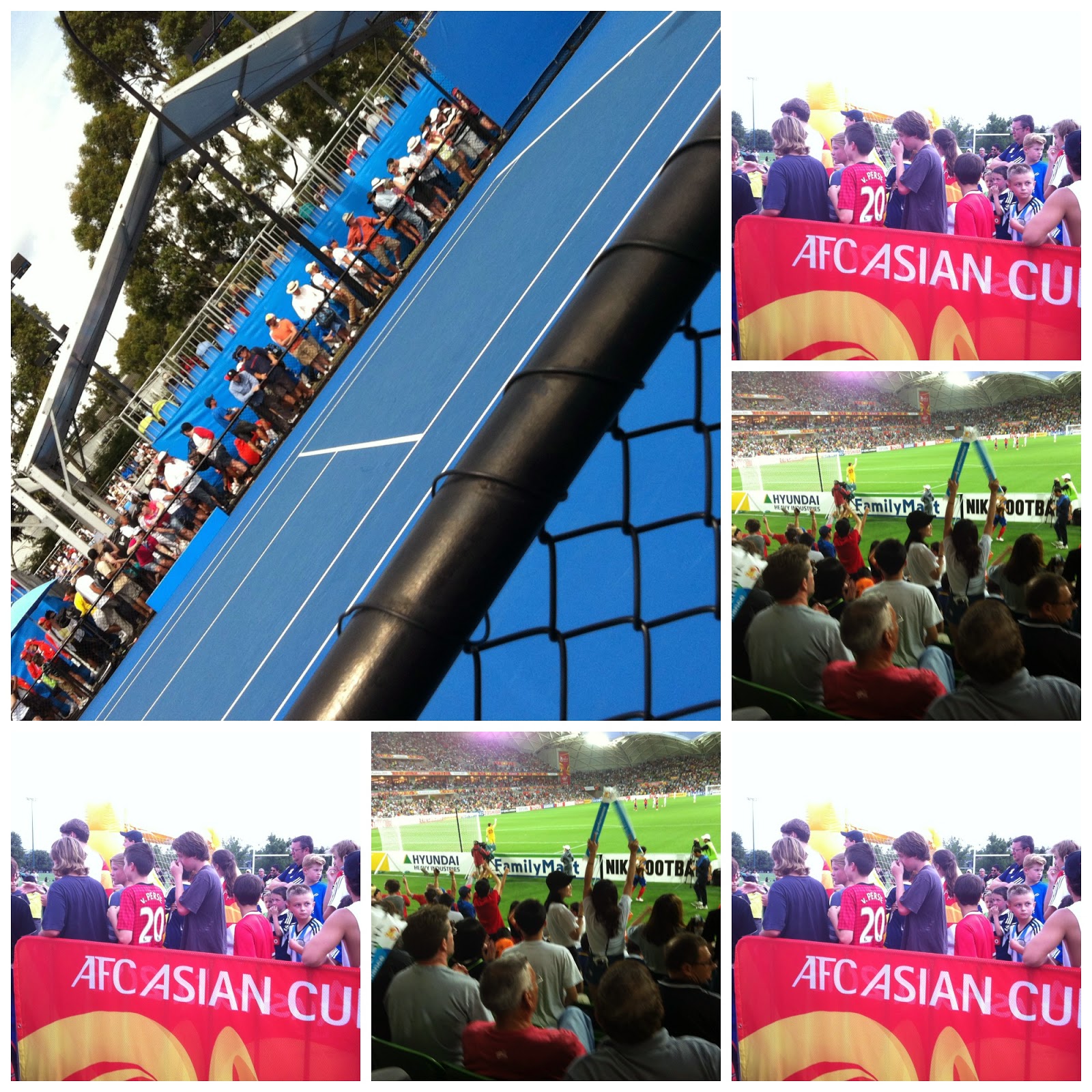 I have committed to my volunteering role and
there is no way I am going to desert my position
BUT ... this is a monumental clash of priorities.
Only in Melbourne could two world sporting events collide...

"Go and Good Luck!"
Luckily I had a very understanding Asian Cup boss... 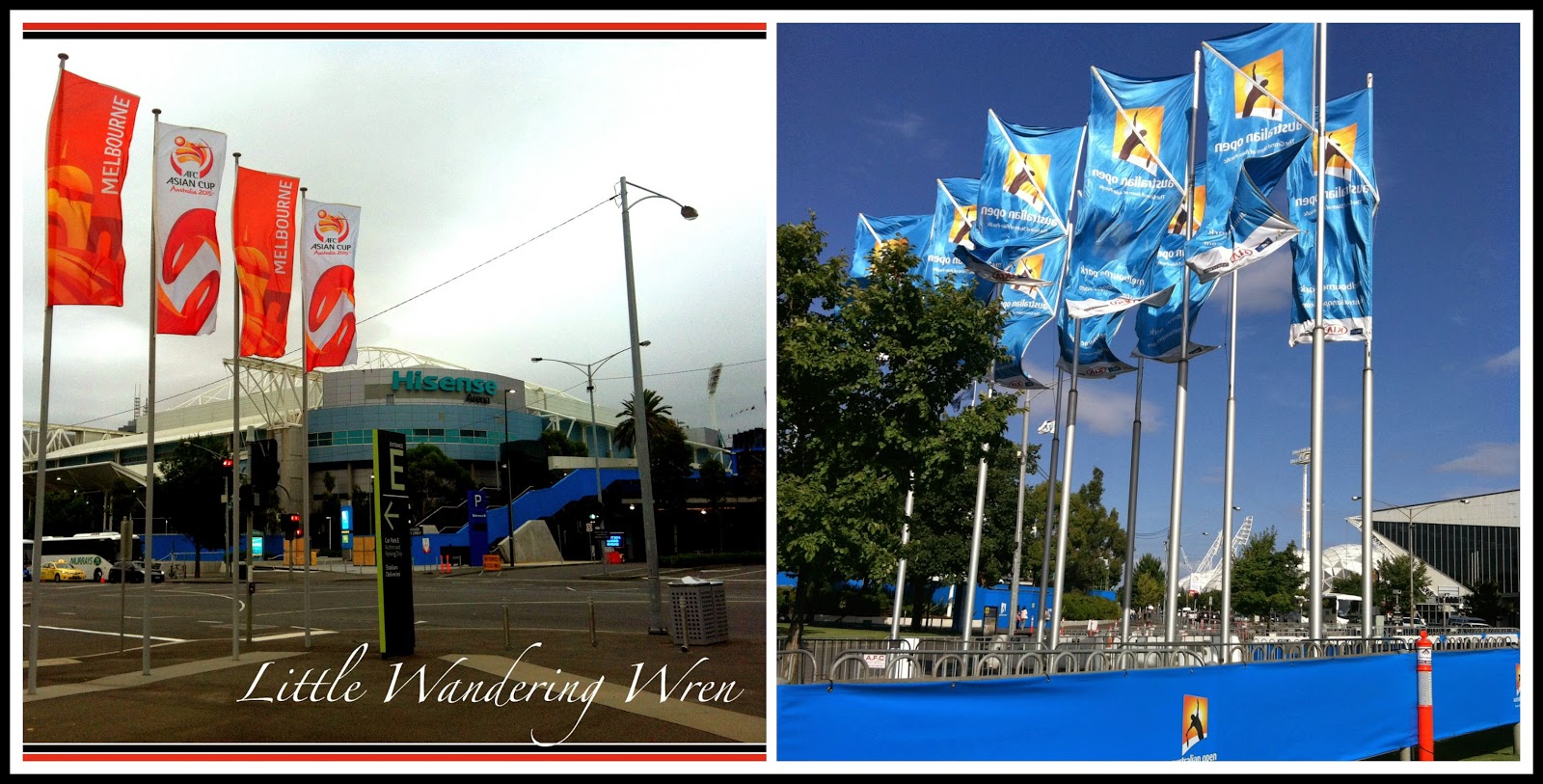 I made it and cheered "lovely shot Irina" through out
but unfortunately Madison Brengle
had more lovely shots on that day...
This is the world of tennis.

I leg it back to the soccer.

Please visit and enjoy the other posts!